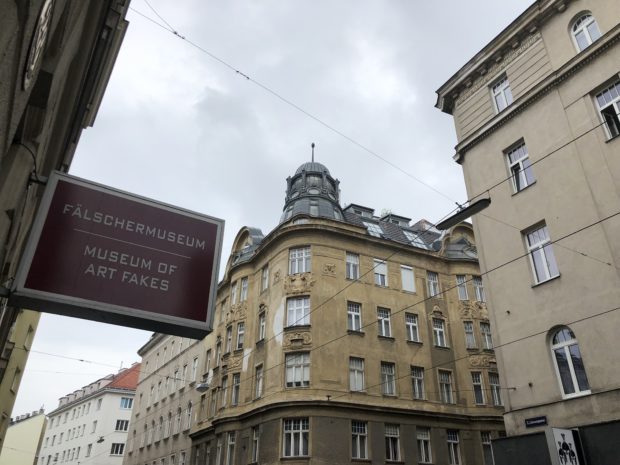 Preserved beneath glass at Vienna’s Beethoven Museum are the composer’s unrequited love letters to a woman known only as his “immortal beloved”. Seeing his raw scrawl sweeps you up, a little, in the agony of it all. “Oh god, why must we distance ourselves from what we love so much?” he wrote.

The museum is in the house where Beethoven lived from 1792. The floorboards creak now as they presumably did then, and when our guide declares, “We have a curl of his hair in the next room”, we pilgrimage hot on her tail to see it. Secured with a silky ribbon, Beethoven’s lock is light brownish-grey. It inspires a holy relic hush, even in a bunch of casual fans. If Beethoven’s hair were exhibited at Vienna’s Fälschermuseum it could belong to anyone. Fälschermuseum translates to Museum of Art Fakes and it is the only one in Europe committed to forgeries. It couldn’t exist in France, where forgeries must be destroyed upon detection. “About 10 per cent of art is fake that hangs in museums,” says the museum’s art historian, Lydia Sumbera. “In the art market it lies between 40 to 60 per cent.”

In the late ’90s, Viennese abstract painter Diane Grobe had met German counterfeiter Edgar Mrugalla, whose stories prompted her to study art law and begin acquiring forgeries. Grobe and her husband opened Fälschermuseum in 2005. “There have been counterfeiters as long as art itself,” says Grobe.

One of their early acquisitions was a fake of Gustav Klimt’s 1907 painting Danaë, by master forger Konrad Kujau. Only it wasn’t. “We sensed something was wrong shortly after we bought it,” she says. By the mid-’80s Kujau had become an art celebrity worth ripping off in his own right and the painting was exposed as a “fake fake”.

Another museum may have removed a work acquired under false provenance, but not Fälschermuseum, where it is yet more proof of authenticity’s chequered past. Klimt’s Judith and the Head of Holofernes is here too; a haughty nude, gleaming with gold leaf. Most of Fälschermuseum’s works are criminal forgeries; however, the Klimt is a copy, which is legal if the artist has been dead for 70 years or longer.

Londoner Tom Keating’s forgery in the style of J. M. W. Turner is beyond convincing. It summons the spectre of a smoggy harbour city as if from the sweats of a fever dream. Born into poverty in 1917, Keating was an art restorer turned dissident counterfeiter, determined to destabilise an art world he deemed corrupt.

Keating planted what he called “time bombs” in his canvases by layering glycerine beneath the paint, which would dissolve when cleaned, leaving the work in ruins. When he was arrested in 1977, Keating estimated about 2000 of his works – including Modigliani, Rembrandt and Renoir fakes – were in circulation. I’ve probably seen his paintings before. I may see more yet. I wouldn’t mind. If I’d seen his Turner forgery in Vienna’s superb MuseumsQuartier instead, I’d have seriously swooned. Which would be a little humiliating. I still remember mistaking “Fool-uru’” (Mount Conner) for Uluru in 2001. And dancing to the sound check once because I thought the band had started. You don’t quickly forget falling for the phoney.

Yet when authenticity leaves the building, so do the more stifling aspects of art appreciation. Such as the pressure to revere not only the art but also the artist, and to glorify their creative drive as pure and true.

At Fälschermuseum we are set loose to appreciate every sort of dirty rotten scoundrel from the opportunists to the sore losers, the bum-broke and the greedy bastards. And in a rather more tender twist of grift, those who forged art to silence their ego’s most terrible fear: that they weren’t very good.

Take Eric Hebborn, for example. Born in 1934 to a cockney family, Hebborn set fire to his London school when he was eight years old. After his teachers encouraged his painting talent at reform school, he flourished at the Royal Academy of Arts and won a scholarship to a Rome art school. Still, critics snubbed his work. Yet when Hebborn forged Rubens and Michelangelo the paintings were declared genuine and sold for tens of thousands of pounds.

Hebborn confessed to his crimes and wrote an autobiography, Drawn to Trouble, excoriating experts, critics and dealers. Soon after his second book, The Art Forger’s Handbook, was published in Italy, Hebborn’s skull was smashed in a Rome backstreet. By then he was no anti-establishment rogue but a multimillion-dollar liability. Many had motive to pick him off.

I’ve come to Vienna from a week in London with my father. Dad was born during the bombing blitz of World War II and grew up on Britain’s largest public housing estate. He’d showed me the house where he and his six siblings were raised and the street he worked on as a fruit-selling “barrow boy” from age 11.

All my life, but especially this week, I’ve been hearing about the streetwise scammers Dad admired and how poverty was grist to their mill. “We always liked it when someone from the upper class would come a cropper,” he said. Disguised beneath a forgery of a Jean-Baptiste-Camille Corot drawing, Hebborn had written: “Only the experts are worth fooling, the greater the expert, the greater the satisfaction of deceiving them.” Dad would like that.

Hebborn also said “the world wants to be cheated”, which reminds me of Beethoven’s curl. It wasn’t beautiful but it was Beethoven’s. Or so we believed. Just as many Catholics believed a piece of petrified flesh that toured Britain in 2013 belonged to St Anthony of Padua, last seen kicking some 790 years ago. Saint or painter, half the buzz is believing you’re close to divine, or major-genius, DNA. American forger Tony Tetro, meanwhile, made so much money from fakes he had to pretend he was a drug dealer. German artist Lothar Malskat’s job was to restore deteriorating mediaeval frescoes in European cathedrals. Expediency, not ego, drove Malskat to whitewash the oldies and paint them anew. His slip-up? Including a turkey in a scene and modelling a religious figure or two on actress Marlene Dietrich.

Forging the old masters requires rare materials and technical skills – things at risk of being lost to the modern world. Dutch painter Han van Meegeren, for example, would source 17th-century canvases, badger-hair brushes and the white lead and lapis lazuli pigment used for paint. In her role as co-founder of Fälschermuseum, Grobe’s raison d’être is also to keep these techniques alive.

In the visitors’ book a mangled sketch of The Scream is signed Edvard Munch. There’s a wobbly-looking Modigliani nude and a drawing of Garfield signed Picasso. “This book is a fake,” someone else has written. I leave on a high – irreverent, illuminated.

The next day at the stately Leopold Museum I see Vienna 1900: Birth of Modernism, featuring key works by Klimt and Egon Schiele. A series of Schiele’s agonised self-portraits stare straight into my soul, but my undoing, the painting that makes my throat constrict, is his Trauernde Frau (Mourning Woman): the most gutting portrait of grief you’ll see. No forger could come close. Or could they?