Tourism after the bushfires: ‘The whole area is screaming for people to come back’

Over the Christmas and New Year’s break thousands of holidaymakers were forced to evacuate coastal regions in Victoria and on the New South Wales south coast. The advice from fire authorities was firm: “If you don’t need to be here, leave now.” 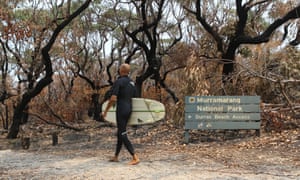 Soon after, the message flipped. “We need you here, come back!” was the call, as towns reliant on tourism, especially from peak times such as the summer school holidays, suffered an avalanche of cancellations.

Yet with landscapes scorched and fires still flaring up, the reality of rebooking is muddied by concerns. Is it safe? Are roads open? Are power lines functional, supermarkets stocked and beaches clean? Are national parks open? Moreover, will it be a nice time?

We talked to people in four bushfire-affected regions and discovered that in most cases the answer is yes. While itineraries may need tweaking and you should certainly call in advance, the Blue Mountains, the Hawkesbury and large parts of the NSW south coast are indeed open for business, with many spots not affected even at the height of the crisis.

The National Parks and Wildlife Service is still recommending people avoid remote areas. While parks are progressively reopening, a closed park means your safety can’t be guaranteed and some are still being assessed after recent fires or still managing active blazes. The maximum penalty for entering a closed park is a fine of $3,300. And yes, it’s enforceable.

Check NPWS alerts for closures and fire bans and read the safety tips. Current NSW fires are updated on the Rural Fire Service website, the bushfire information line (1800 679 737) or the Fires Near Me app. Check roads on livetraffic.com.

The Shoalhaven area takes in 170km of coastline from Kangaroo Valley in the north to Pebbly Beach in the south, via 49 towns and 100 beaches – many enclosed by bush that thrums with insect drone and rustles with birds.

This map shows which areas were impacted by fire and which escaped the worst. With the water monitored and clean, it’s a great time to snorkel to see weedy sea dragons, smooth black rays and giant cuttlefish. The 100 beach challenge, meanwhile, directs people to beautiful and lesser-known beaches, 16 of which are white sand beaches similar to the famed Hyams Beach near Huskisson (rumoured to be Australia’s whitest sand).

Shoalhaven’s major tourist towns of Berry, Jervis Bay, Mollymook and Ulladulla are fully operational yet uncannily quiet. The lull means visitors can book beds at places such as glamping pioneer Paperbark Camp, which usually fills up six months in advance.

Five minutes from Mollymook Beach is Cupitt’s Estate winery. Overlooking Burrill Lake, it has a cellar door, a fromagerie, a brewery, an excellent kitchen and Sunday music sessions. It’s just one of several wineries close to beaches around Berry and Shoalhaven Heads with multiple wine-and-swim combinations possible.

From Sydney, you can drive the 90 minutes to Berry through the windy countryside of Kangaroo Valley or directly to Seven Mile Beach national park with accommodation in Gerroa, Nowra or Jaspers Brush. Alternatively, the Keep On Camping website displays which caravan parks and campground are open around Australia.

Further south, the new Jervis Bay Brewing Company is one of many businesses feeling the pinch of a slow summer. “The locals are out as much as they can be but their pockets are only so deep – they’re also hurting,” says co-owner Paul Walker. The company is currently in a precarious position – they’d banked on visitors over the Christmas period and now, “because we didn’t get that trade we are now in a position where we don’t have enough money to make or can more beer”.

Walker is thankful his area was spared the worst of the fires, saying “we dodged a bullet, big time,” but now he says “the whole area is screaming for people to come back”.

If you take his invitation, dolphin tours and fishing trips will be at your fingertips. As will Booderee Botanic Gardens, Australia’s only Aboriginal-owned botanic gardens, with guided walks available. Or head further south to Pebbly Beach in Murramarang national park, to see surfers, sea eagles and kangaroos in a single beach outing.

Blue Mountains and the Hawkesbury 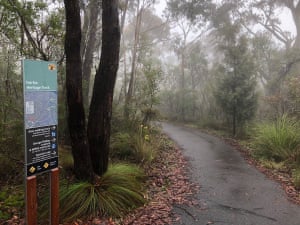 While estimates suggest about 80% of the greater Blue Mountains world heritage area was affected by recent bushfires, the popular tourist strips of upper mountains towns Katoomba and Leura never closed. “Mass cancellations” happened anyway, says Blue Mountains Tourism president Jason Cronshaw. “[But] compared to other regions where tourism attractions, hotels and infrastructure were destroyed, we recognise how blessed we are.”

The Blue Mountains can be a day trip or a weekend away from Sydney by train, coach or car. To help the businesses in most need, travel there or back along Bells Line of Road, through the bushfire-affected Hawkesbury region. An hour in, Kurrajong has some excellent al fresco lunch options, while 15 minutes further west, the orchards of Bilpin await. Apples, persimmons and plums are in season for recreational picking but fires hit some farms hard, so call in advance.

From Bilpin, travel through Mount Victoria, home of the historic Mount Vic Flicks cinema, to Blackheath. Many lookouts and walks in the Blue Mountains national park are open again. On the wheelchair-friendly Fairfax Heritage track “you’ll see fire regeneration at its best”, says a NPWS spokesperson, including “lovely bright-coloured shoots re-emerging on the blackened trees”. 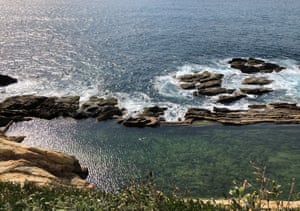 Halfway between Sydney and Melbourne, the sapphire coast brims with national parks, lagoons, rivers, fishing and delectable seafood. Its main coastal towns of Bermagui, Tathra, Merimbula, Pambula and Eden are unaffected by fires however some national parks remain closed.

It’s possible to stay close to townships too. The photographer’s delight of Bermagui Blue Pool – a sea bath with showers, toilets and stairs – is good for kids or older people. Famous for its deep-sea fishing, at Bermagui Fisherman’s Wharf you’ll see tuna or kingfish coming off boats – and straight on to your plate at local favourite Il Passaggio. The new Harbar meanwhile, overlooks, well, the harbour.

Merimbula has some stunning beaches to choose from, or you can do an oyster farm tour with Wheeler’s Seafood, served straight from Merimbula Lake. Sydney rock oysters are freshly shucked at Broadwater Oysters at Pambula Lake, too, or packed for a picnic from anywhere along the oyster trail. Pambula village has a splash of historic homes with bull-nose verandahs and some excellent shopping, including Wild Ryes artisanal bakery.

In “the humpback highway” of Eden, the local Aboriginal land council is working to link up ancient trails to form the Bundian Way, a 365km walk. For now, you can stroll the 600-metre whale dreaming trail to learn how the Katungul people and the beowas (killer whales) interacted, or do the 1.8km beach-to-beach story trail. Kids will enjoy the Killer Whale Museum in Eden township.