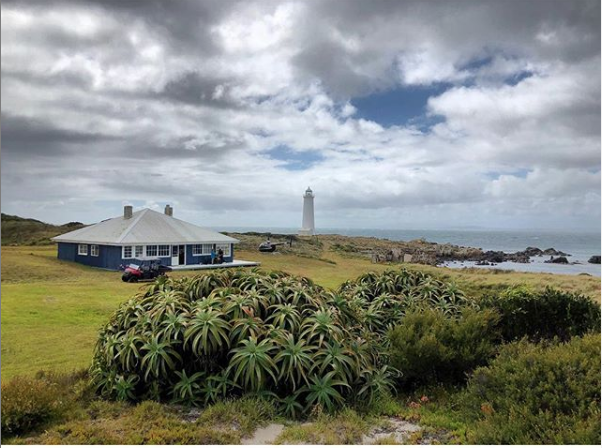 The festival merch was a bit of a guffaw. The hats were hot pink and embroidered with eggplant and peach emojis (code for penis and butt) while the tote bags read: “London Paris New York Tokyo Berlin Launceston.”

After a decade in Hobart, Mona Foma – the summer festival of the Museum of Old and New Art (MONA) – moved to Launceston this year, lowbrow gags and all.

But does Launceston, population 84,000, actually deserve its place on that tote-bag A-list of cities? It’s had world-class wine and the wilderness for years; now there is art and music.

About 20,000 people attended Mona Foma shows, including gigs by Neneh Cherry, Courtney Barnett and rising South African star Nakhane. Spaces across the city were transformed into one-off venues and Amanda Parer’s huge inflatable sculpture, Man – a twist on Rodin’s The Thinker  – floated on the silky waters of the city’s Cataract Gorge. “To make ourselves the centre of the arts world, if just for a weekend?” says winery tour operator Eamonn Seddon. “That’s something.”

Confidence breeds confidence and Tasmania’s northern city is full of it right now, with restaurants, bars and hotels opening apace.

The impact on Hobart of MONA, helmed by art collector and gambling millionaire David Walsh,  has been likened to that of the Guggenheim on Bilboa, Spain. MONA is Tasmania’s second most visited attraction (Salamanca Market, also in Hobart, is number one), and 41 per cent of those exploring “the museum of sex and death” are first-time visitors to the state.

In 2016 MONA’s winter festival, Dark Mofo, got the H-O-B snuffed out on Hobart airport’s neon sign so it glowed “Welcome to art” instead.

On the mainland we are told, yet never convinced, that more Australians partake in art than sport. In Tasmania, it no longer needs stating.If Dark Mofo could flip the city’s cold weather into an asset, any arts tourism transgression seemed possible – as was proved in 2017, when a Dark Mofo-themed P&O cruise ship docked close to a warehouse in which Austrian artist Hermann Nitsch was enacting a sacrificial ceremony starring a cow carcass, blindfolded bodies on crucifixes and 500 litres of blood. Nothing so confronting happened at Mona Foma in Launceston in January. Even the Faux Mo after-parties at Lonnies Niteclub kept the wild relatively mild. Northern Taswegians are more conservative, so perhaps curators were easing in. Though taste.walk.talk guide Brock Kerslake says: “It takes people out of their comfort zone. If you’re a bit confused, that’s a good thing.”

The cafe, with interiors by artist Charles Blackman’s son, Felix, was so popular she had to cease mainland supply, melting all her excess butter into the bakery’s next-level pastries instead. Mona Foma’s finale, she says, was her biggest weekend yet.

“Launceston is losing its cultural cringe,” says Kim Seagram, who moved here from Canada in 1992 and opened her acclaimed restaurant Stillwater in 2000. “Our shoulders used to be down but now they are pulled back. But we need more fabulous young people to move here.”

If they do, they are sure to find a cute place to live. Hike up the hills and it’s all well-maintained Victorian houses interrupted by a modernist brick bungalow or two. “I tell people Launceston is more English than England,” says Eamonn Seddon. “We were broke in the 1930s, so a lot of buildings weren’t knocked down and now they’re heritage listed.” Downtown, hip new businesses such as Saint John Craft Beer Bar are unlikely neighbours to the Country Women’s Association, where single cookies atop paper doilies are labelled in old-lady cursive, and pun-tastic shopfronts such as Damsel In Dis’ Dress.

Developments in highrise-free Launceston are limited to 14 metres. The Peppers hotel chain, however, found a loophole, converting four old grain silos on the River Tamar into the nine-storey Peppers Silo Hotel. Its restaurant, Grains of the Silos, has an abundance of fresh island produce and cheerful staff – even at breakfast.

“Stack of pancakes?” says the chef on omelette and pancake duty. “Just a little stack?” he urges when I hesitate.

Meanwhile, my mother (with whom I’m travelling) can’t find the butter. She’s looking for a silver-wrapped portion, but it’s actually a hunk of glossy yellow goodness in a bowl.

“We’ve always eaten well here,” says Brock Kerslake. Our dessert at downtown Bryher cafe is made with mulberries – too fragile to commercialise, but the kitchenhand has a tree – and white raspberries dropped off by a local.

“People have always been garden proud, not house proud in Launceston,” Seagram says. “They’ll say, ‘We had to share football boots down the generations, but we ate like kings.’” They’re no stranger to a shucking knife, either. Coastal property has historically been cheap and many families own a weekend water view. At Grain of the Silos, our St Helens oysters are in deep shells with a green, mossy surface. “It’s the cooler climate,” says our waitress, who prefers Bruny Island oysters because “that’s where we’d go on holidays”.

Few families have holidayed on Swan Island (population zero). We chopper in with Unique Charters, a bespoke helicopter service with its roots in romance tourism – blokes proposing in scenic places, mainly.

The island is tiny yet all-consuming in its very Tasmanian sense of forsakenness. Scratch its windswept surface and out spill stories of Indigenous displacement, shipwrecks and isolation. The wife of one lighthouse keeper, Eliza, is buried in the island’s only marked grave, set between the final resting place of two drowned children, the wooden crosses long gone.

The wind off Bass Strait makes the silver tussock grass appear to flow in liquid form. Everything is singular – the lighthouse here, the keeper’s cottage there, the convict ruins over by the cliff. Kerslake’s words return to me: “It’s a bit wild down here, a bit end of the world.” On the beach, a solo Sooty Oystercatcher swivels its head, watching us leave with one red eye.

The writer stayed as a guest of Tourism Tasmania.

Swan Island The rustic lighthouse keeper’s cottage (seven beds) is available on Airbnb from $390 a night. You will need to fly or helicopter in – see uniquecharters.com.au