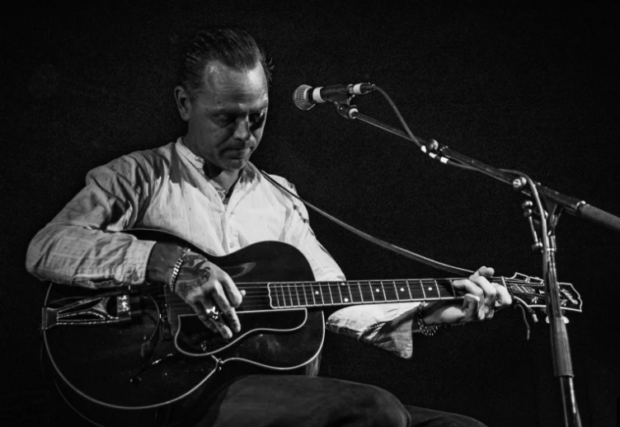 “Strange gig,” says Delivered Live’s headline act, C.W. Stoneking. Usually, his bluesman-of-the-bayou mumble trades on a sense there ain’t nothin’ it ain’t seen before. But even Stoneking can’t feint at having memories of anything quite like this. No doubt the crowd is going wild online. But for those streaming YouTube through their TVs (where comments don’t appear), and for performers in tonight’s studio, only patchy applause scratches at the silence at each song’s end.

Only so many hands can clap when a socially distanced skeleton crew is producing a show that, despite boldly stating “this will be a ‘normal’ gig”, is actually beaming from a universe far, far away where it is ‘normal’ for the crew to wear face shields and yellow hard hats as if some angle grinding may be imminently required.

Early acts The Teeny Tiny Stevies and ventriloquist Showko Showfukutei are great for the kids. The comedy is, at least, comically hit and miss with Michael Williams hurrying through a flip-chart set that’s on the perplexing side of funny and Double Denim on the too-high-beam side of brash.

Comedian Sami Shah hits the spot when he asks “why am I doing crowd work?” then continues to do it anyway, gaining steam as he does. These are the best moments: when the weirdness is addressed directly, allowing Delivered Live to relax from its debut night stiffness and genuinely connect.

It’s when alt-rocker Alex Lahey stops her acoustic set to invite a crew member up so we can see his outfit. Or when Kevin Mitchell (Bob Evans) of Jebediah marvels “it’s like someone’s made a TV show based on one of my poorly attended live shows”.

Or anything, really, said by host and country musician Henry Wagons, who gleams in a series of sequined animal-print jackets he assures us are sanitised given “they are surely a shiny surface the virus can survive on”.

It is Wagons who keeps the wheels on when the show’s principles of social inclusion see it cross to interviews with mental health experts, footie umpires and, best of all, AFL legend Kevin Sheedy, who shares some pandemic survival tips: keep smiling, keep chasing knowledge, listen to music and spend time in your garden.

As the hours pass, Wagons seems to blur into The Hitchhiker’s Guide To The Galaxy’s last surviving man, Arthur Dent. You can see his cogs turning, with each utterance seeming to form a full sentence just before it pops out.

Yet he says everything he needs to. He tells us 2000 tickets are close to being sold and explains: “This is a gig that’s about funding the nuts and bolts of the entertainment industry that’s been so hard hit.”

If you haven’t yet indulged in the new wave of streamed live music events – do it soon.

Don’t do it to see something slick because it’s not there yet. Do it, instead, to see performers up close and real with the ground still wobbling beneath them. Or to decide for yourself if we might not be witnessing a musical era begin: rare, necessary and prototype-free.