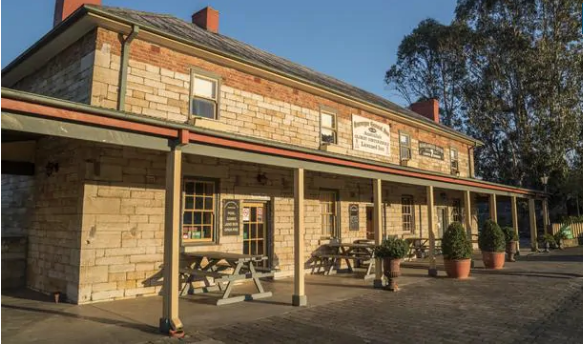 First published in The Australian, May 2020

Soak up the atmosphere at these regional NSW watering holes.

The Prince of Wales Hotel, Gulgong

Gulgong radiates 19th-century charm with its veranda posts, original shop facades and occasional horse trough. After poking through the fascinating Henry Lawson Centre museum, head to the Prince of Wales Hotel, a favourite for pub grub such as its award-winning steak sandwich. Run by the Ellis family since 1976, the hotel was built in 1872 during the region’s gold rush and hasn’t changed much since. The bar is made from a single length of ironbark wood and a snakeskin stretches across the ceiling above; elsewhere you’ll find old bottles, rabbit traps and vintage saddles. “People come to Gulgong to see things as they once were,” says publican Rowena Ellis. In winter, warm up by one of three open fireplaces inside or enjoy the big brazier in the beer garden; it’s a perfect spot for a glass of red and some homemade soup.

Blink and you’ll miss it, but you really shouldn’t. Sofala is one of those ramshackle towns that’s never quite capitalised on its historical significance but is all the better for it. People come to the banks of the Turon River to fish for trout, camp and have picnics, usually via some chinwagging at the bar of the Sofala Royal Hotel. The 1862-built, two-storey timber hotel, with its weatherbeaten bullnose veranda, has an architectural style more commonly found in Queensland. It has been in publican Sandy Tomkinson’s family since 1955. Curiosities on display include old Bathurst newspapers found beneath the linoleum, and Bushells tea chests discovered behind an upstairs wall. “It’s the people that make the pub, everyone mixes and mingles,” says Tomkinson. On a hot day, wet your whistle in the shade of the majestic Paulownia tree outside but don’t miss bush band Rebellion on the Turon if they’re playing indoors.

Australia’s oldest “continuously licensed” inn, the Surveyor General in Berrima has kept a lot of the township’s history displayed within its convict-hewn sandstone walls. “People say they walk in and feel they’ve gone back in time,” says manager Peter Durney. It was built on the Wingecarribee River in 1834 with stone from a nearby quarry, and bushrangers including Ben Hall’s gang once drank here. These days, aside from loyal locals, it’s mainly day-trippers who come in for a beer pulled at the original bar. While the Durney family, owners for 26 years, are avid collectors of old pistols, rusty convict chains, vintage books, photographs and other memorabilia, they’ve kept the bar and bistro more current, with craft beers from local breweries on tap and wine from nearby cool climate wineries available by the glass.

Dubbed the Forgotten Valley and encircled by the Dharug, Yengo and Wollemi national parks, the Macdonald Valley was once part of a stagecoach route between Sydney and Newcastle. These days, the village of St Albans has just one operating business: the Settlers Arms Inn, established in 1836. The Burns-Woods family have run this quintessential sandstone pub for 32 years, in which time they’ve perfected their signature Wagyu beef pie and homemade rhubarb crumble. Peacocks and chickens roam the leafy grounds, which guests (and their well-behaved dogs on leads) can explore, perhaps to the sound of a band playing beneath the bougainvillea. Inside, it’s pretty quiet. “The TV stopped working so we took it out,” says manager Steve Kavanagh. If you’re tempted to make it a weekend, St Josephs guesthouse is a six-minute drive from the inn, erected in the ruins of a 160-year-old Catholic church.