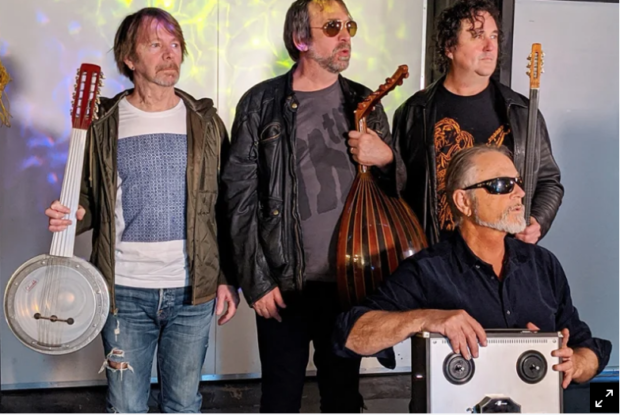 If a future historian ever documents the work of The Church’s Steve Kilbey they’d need to rewind the tape startlingly far, with Kilbey’s new album alongside classical guitarist Gareth Koch, Songs From Another Life, described as “music of the ancients”.

Any hint of second-guessing and the record would have dissolved in a puddle of salty self-doubt. But Kilbey and Koch have conviction in spades – or perhaps in daggers, lances and pikes – and perhaps accidentally, but no less magnificently, the duo has made one of the most metal-minded albums I’ve heard in a while.

Koch’s guitar is a delight. Think English traditional (a la Scarborough Fair) with the sprightly frills of Spanish classical (a la Joaquín Rodrigo) and a vinegary splash of spaghetti Western or Appalachian folk. Together with Kilbey as troubled troubadour, Songs From Another Life is esoteric yet palatable and pretty and lacquered with the boldness of its medieval-inspired mission.

To hear it played in full, however, you’d rather be by a fire sipping a glass of mulled wine. Not slamming schooners at Paddington RSL as some noisy blokes are doing at a table close to another table of chatty women drinking wine. Despite the civility enforced by the COVID era of seated shows, for largely acoustic rigs such as this, perhaps seating people in rows would be a smart next step.

Bringing the songs to life on stage is a reverent Roger Mason (Icehouse) on effects, guitar, ukulele and dulcimer, and Barton Price (The Models) on “drums, percussion, horseshoe and chains”, says Kilbey. Of himself, he says: “I am not Steve. I’ve lived a thousand lives, most in ancient worlds.”

The ballroom-like RSL venue is atmospheric enough and The Winged Heels perform with gusto but you want Kilbey’s high words and even higher concepts to induce full body gooseflesh. You want to be swept up and back to the time when prophets, patriarchs and pagans still roamed in bone and flesh form. Instead, we watch on, rather than dive in, distracted by eruptions of chatter because the band’s sound never quite knits into the tightly woven tapestry it needs to be to be.

The album, as well as Ophelia Without Wine from the duo’s previous record Chryse Planitia is played. And then an encore with a special finale – Under The Milky Way.

The Church hit from 1988 is made lush and worldly by Koch’s guitar, Price’s bells and tablas and Mason’s dulcimer. It’s sung contemplatively by Kilbey, seemingly not at all out of charity for the people who pilgrimage to the front. Several kneel to comply with COVID rules (no standing) to film the song, appearing, ironically, as the devout congregation Kilbey should have been playing to all along.