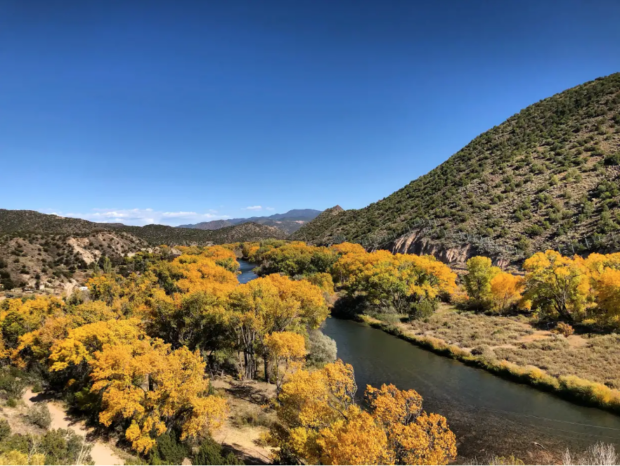 Under the spell of Santa Fe, home and sanctuary of Georgia O’Keeffe

Some call painter Georgia O’Keeffe the mother of American modernism. The Georgia O’Keeffe Museum in Santa Fe – one of just a few in the world dedicated to a female artist – describes her simply as one of the most significant artists of the 20th century. Either way, her paintings of flowers and New Mexico landscapes, in particular, are luminous and unforgettable.

“There is a huge interest in O’Keeffe’s life beyond her art,” says the museum’s curator of fine art, Ariel Plotek. “She came to represent a kind of badass American icon – who also made her own clothes.”

Images of her are entwined with her iconic status as an artist, and transfix us still. She modelled in photographs taken by her husband, Alfred Stieglitz, and others from her 30s until her 90s, presenting her own image to the end – without makeup and sartorially minimalist. The museum is an immersion in 144 of her works. But it is busy and you imagine O’Keeffe – who lived in an isolated hacienda called Ghost Ranch until she was 96, painting in solitude, bar visits from art world doyens such as Andy Warhol and Ansel Adams – may herself have steered clear.

Outside in the sharp, high-altitude sun, however, you can soak in the enchantment a young O’Keeffe felt on first visiting Santa Fe in 1917. That many others felt too. Artists have been moving here since its days as a burgeoning art colony in the early 1900s. Despite being the fourth-biggest city in New Mexico, Santa Fe is the third-largest art market in the United States after New York and Los Angeles.

There is no diluting the glut of art in a city so small; its streets bulge with galleries from the quirky to the high end. In the historic district of Canyon Road, especially, everything appears artful. Canvasses hang on external walls, throbbing colour in the sun, and sculptures loll about on corners and in gardens.

“It’s a friendly scene in Santa Fe,” says Elaine Ritchel, the local guide on our exploratory art-themed tour run by Atlas Obscura. “It’s OK to browse and ask questions of the gallerists.”

The city’s strikingly uniform adobe architecture is due to a 1950s zoning law enforcing what’s called the Pueblo Revival style, which comes in ochre and earth tones only.

Strung and hung everywhere are lustrous clusters of red chillies (a New Mexico tradition called ristras) and even a slight breeze sets the silver-green leaves of the aspen trees twirling. The cottonwood foliage is as implausibly yellow as the fluffy chamisa plant, blooming from any available dirt to announce autumn’s arrival. After dusk, in Santa Fe, the sky doesn’t so much darken as dim to a velvety navy blue like the lining of a jewellery box.

Up on Museum Hill, venerable institutions such as the Museum of International Folk Art and the Museum of Indian Arts and Culture vie for your attention between giddying views of the Sangre de Cristo (Blood of Christ) Mountains. And along the plaza-facing wall of The Palace of the Governors, members of New Mexico’s 23 sovereign Indian nations have been selling their craft and jewellery for more than 60 years, as part of a Native American vendors’ program.

“You know you’re buying from the family directly,” Ritchel says.

It’s not all art appreciation. “Margarita?” restaurant employees offer first thing, before enticing you with their twist on the city’s signature cocktail. And at 7000 feet above sea level, one packs the punch of two.

Yet to truly understand the area’s pull for artists, Ritchel believes you need to place yourself in the landscape itself. In her welcome note she writes of her desert drives, as a kid, in her mother’s Mustang convertible. “Wind whipping around us, I’d stare up at the tangle of stars as we hurtled through the blackness. The landscape, sky and light are not just elements of the backdrop in New Mexico, they’re protagonists themselves.”

Early one morning we exit Santa Fe’s porous city limits as they smudge outwards to the high-desert plains. At the far eastern edge of the Colorado Plateau “O’Keeffe country” begins for real with the multicoloured cliffs and canyons she painted so often.

“I knew the minute I got up here that this was where I would live,” she told The New Yorker in 1974.

A cowgirl in chaps waits for us at the Ghost Ranch corral. The horses are saddled as she flips through the paintings we’re here to see in three-dimensional form. The juniper tree, too, that O’Keeffe mis-identified in her 1937 work, Cedar Tree with Lavender Hills. “A juniper is much hardier and can take 900 years to decay,” the cowgirl says. “So the tree looks the same today as it did 80 years ago when she painted it.” We hoof off towards the hacienda with the chief wrangler, Dan Ramsey, half-drawling, half-hollering some key O’Keeffe stories, radiating exactly the enigmatic charisma a handsome cowboy should. But we don’t make it. A mile in, the wind picks up, spinning dislodged shale in little tornadoes and vibrating the sagebrush, spooking our horses.

O’Keeffe’s view of Cerro Pedernal – the flat-topped mesa she painted 28 times and where her ashes were scattered in 1986 – must wait until next time.

Or not. “Georgia didn’t want us there,” a fellow traveller says, wryly, and I find myself liking the idea of her posthumously defying us. In any case, O’Keeffe country is all around – flinty, wild and bright – and no single tangible sight, viewed with a print of O’Keeffe’s abstraction of it, could bring her any closer. Perhaps she was made to be mythic; a construct of other people’s tales.

Like the wrangler, Ramsey, who you suspect O’Keeffe would have liked. He didn’t know much about her when he came to Ghost Ranch, he admits.

“I’m more into French Impression, Monet, and cave paintings, prehistoric; I have them tattooed all over me,” he says. “But I’ve come to really appreciate aspects of Miss O’Keeffe, like the privacy thing. When I get off work I sit at my picnic table and watch the sun go down and the stars come out and I just want to be left alone.”

Kate Hennessy was a guest of Atlas Obscura trips.